Laos is a country as yet untouched by the modern demands, stress and peace of life.Its beauty lies in the Lao people, century-old traditions ans heritage, ands its lush, pristine landscape. Laos has a rich history stretching back 10,000 years. At its height, it ruled over present day Laos and much of neighbouring northern Thailand. Landlocked and laid-back, it’s a unique spin on the Southeast Asia experience. 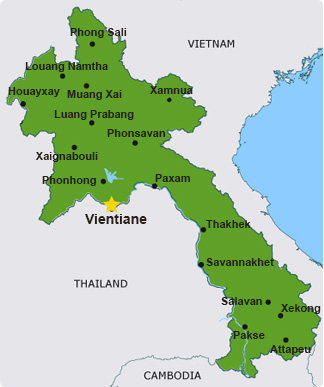 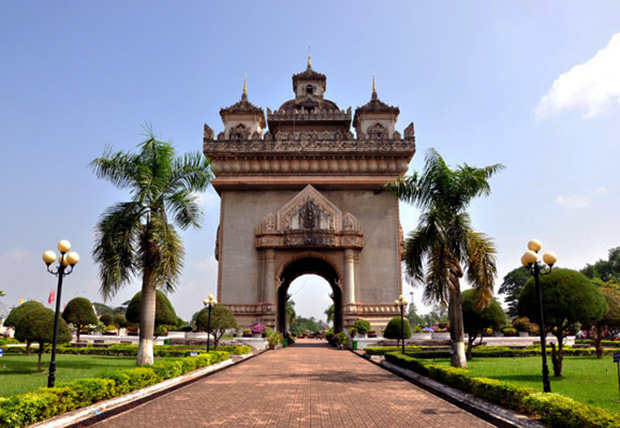 Located on a curve of the Mekong River, Vientiane Capital has a recorded history that stretches back to around 1.000 AD. The area was originally settled because of the fertility of the surrounding alluvial plains, and Vientiane became the capital city of Laos around the mid 16th century. Vientiane delivers a relaxing riverside break where one of the best things you can do is grab a drink and enjoy the sun’s spectacular show as it sets over the Mekong. Despite being the largest city in Laos and the hub of commerce and administration, Vientiane is still refreshingly laid back. Patuxai Victory... 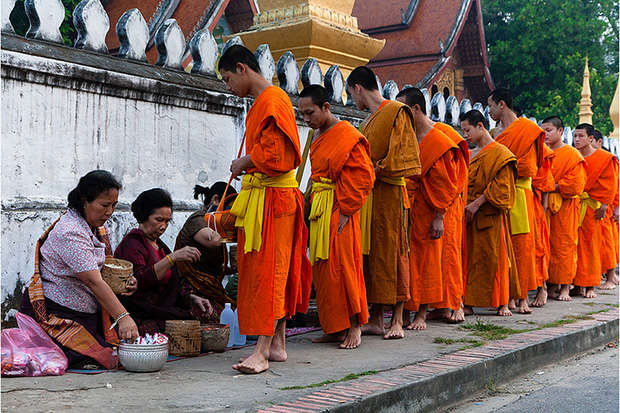 Luang Prabang was the ancient royal capital of the Lan Xang Kingdom until King Phothisarat moved the administrative seat to Vientiane in 1545. Regardless, it has continued to overlook Vientiane as the destination of choice with its amalgamation of crumbling French architecture, glistening temples and extensive natural beauty. Even the hardest of hearts would have a struggle not to warm to the place. The town’s entire historical section is dedicated to tourism, with everything from former royal palaces to over 33 Wats (temples), on the tourist trail. This former Royal capital still remains the main centre for Buddhist learning... 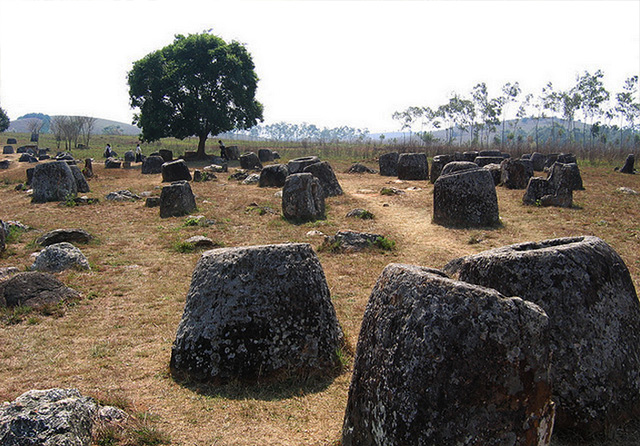 In the northeast of Laos, lying across a flat high plateau is the province of Xieng-Khouang, most commonly known for the intriguing ‘Plain of Jars’. From the early 19th century until 1975, central Xieng-Khouang and the plain of jars was a recurring battle zone. It's estimated that more bombs where dropped on Laos between 1964 and 1973, than in the Second World War. As a result, visitors are advised to stick close to guided trails as unexploded ordinance still litter the plain. Xieng Khouang is home to the Plain of Jars, the prehistoric stone megaliths which attract thousands of tourists... 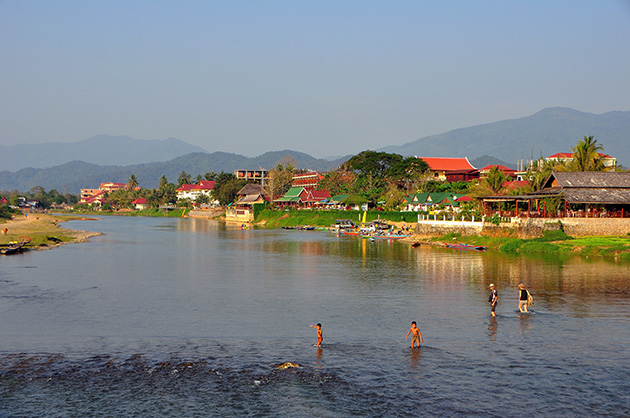 The small town of Vang Vieng is located 150km north of the Vientiane Capital. This is a place of a dreamlike landscape of bizarre limestone mountain peaks and scenic cliffs with the Nam Song (Song River) bisecting the town. At the base of the town’s limestone mountains are a network of caves. There are a variety of well-developed tourism services in Vang Vieng and a wide range of accommodations. Water sports such as kayaking and tubing are popular and rock climbing is also a growing pastime. Vang Vieng also offer some peaceful places like several 16th and 17th century... 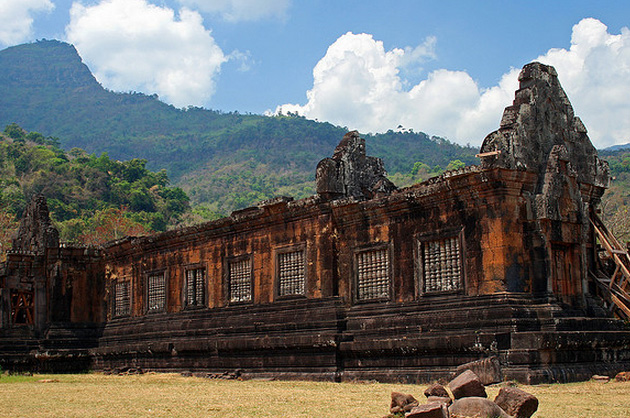 Pakse is located at the mouth of the rivers Xedong and Mekong. The term Pakse means the ‘Mouth of the River Se’. This city is inhabited by 70,000 people and the Pakse International Airport serves as a link to the Bolaven Plateau. The construction of this airport was completed in November 2009, and has connections to Siem Reap, Vientiane and Bangkok. In the Pakse area, there are about 62 tourist sites : 32 natural, 7 historical, and 27 cultural. There are many French colonial style buildings remain in the city. The Sedon Bridge often called “old bridge” by the people... 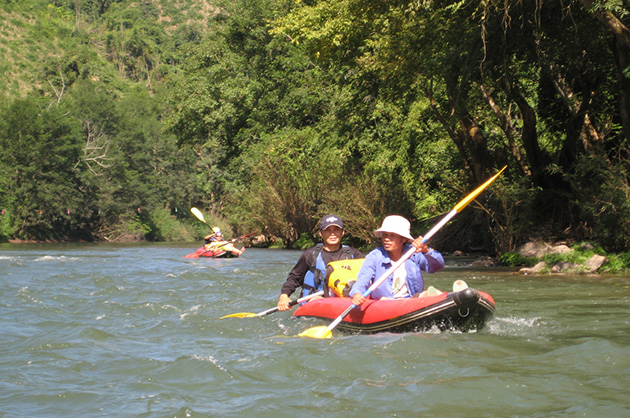 Located on the banks of the Nam Tha River, Luang Nam Tha means ‘The area around the Tha river’. Luang Nam Tha is the largest city in the province of the same name, in the northern part of Laos. Like Huay Xai, Laung Nam Tha is primarily perceived as a stopover point. Most visitors who come from China to Laos use this city as a starting point instead of taking the uncomfortable and crowded boat ride between Luang Prabang and Huay Xai. The city has two distinct parts; one which is referred to as the old town was bombed during... 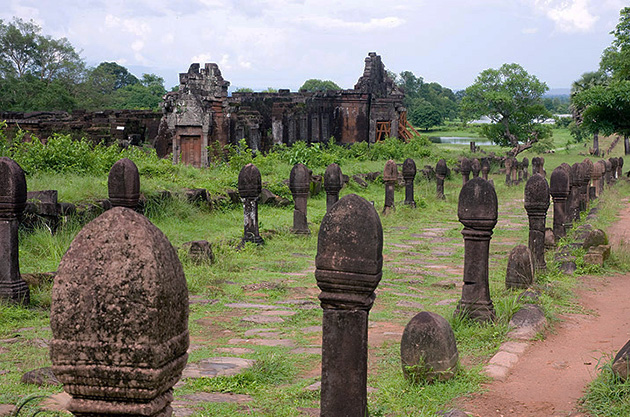 Champasak was once, 1400 years ago, the centre of power in the lower Mekong basin, later a revered outpost of the Khmer Angkor empire and later still one of the three kingdoms to rule over the remains of Lane Xang. A fine heritage that, according to the last prince of Champassak, was brought to hard times by a former queen’s indiscretion. The beautiful Nang Pao ruled over Champasak in the mid-17th century. But it’s lonely at the top and the queen found comfort in the arms of a prince from a neighbouring kingdom. Alas, for the lady’s pennyroyal was ineffective,...