Laos at a Glance Tour – 5 Days

Just 05 days tour will give you a quick looked of Laos, from Luang Prabang, lies in a valley at the confluence of the Mekong and Nam Khan rivers. It’s known for many Buddhist temples, including the gilded Wat Xieng Thong , Phousi Hill for a beautiful sunset view of the city and Pak Ou Cave on Mekong River. We head to central of Laos with Vientiane capital which mixes French colonial architecture with Buddhist temples such as the golden, 16th-century Pha That Luang, a national symbol.

DAY 01: LUANG PRABANG – ARRIVAL (-/-/-)
On arrival at the airport, you will be met and transferred to check in the hotel.
After a soft rest, your city tour begins with a visit to the magnificent Wat Xiengthong with its roofs sweeping low to the ground, which represents classical Laotian architecture. We still have time to visit the Royal Palace Museum, which hosts a range of interesting artifacts. If time permits, we will take a stroll around the city to visit Big Brother Mouse, which is the most famous bookshop in Laos. The next stop is Ock Pop Tock, meaning East Meets West, where you can learn about the traditional weaving in Laos. A visit to Luang Prabang would be incomplete without ascending the 329 steps to the top of Phousi Hill for a beautiful sunset view of the city and its glowing reflection on the Mekong River. The tour ends after a visit to the famous Night Market, where you can find a lovely collection of handmade textiles made by local and hilltribe people surrounding Luang Prabang. Overnight in Luang Prabang.

Optional: Enjoy a private Baci ceremony after sunset at a local family. The Baci ceremony as a traditional ritual of the Lao people expresses the spirituality of the country and is a highly memorable experience and a deep insight into Lao culture for the participants. 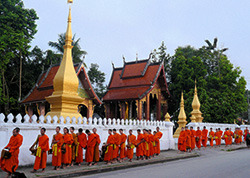 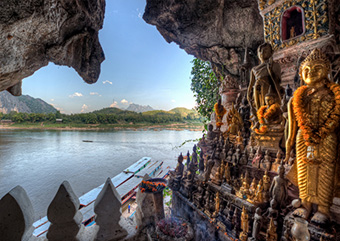 DAY 02 : LUANG PRABANG – PAK OU CAVES – BAN CHAN (B/-/-)
An optional early start gives you the fantastic opportunity to participate in the daily morning rituals of saffron-clad monks collecting offerings of Alms (ubiquitous sticky rice) from the faithful residents. This tradition is very unique in Laos, being the only Buddhist nation still preserving the procession. From there, we will take a short visit to the morning local market near the Royal Palace. At the market, you can find anything from rice, to fresh vegetables, to steamed fish, frogs, and anything else that might be the day’s catch, just set up on the ground, this is what the locals do every day. This is really the chance for you to get a real flavor of the local culture.
After breakfast, we board a cruise upstream on the Mekong River, which gives us a panoramic view of the tranquil countryside as well as an interesting visit to the mysterious of Pak Ou Caves, two linked caves crammed with thousands of gold lacquered Buddha statues of various shapes and sizes left by pilgrims. Along the way, we stop at the village of Ban Xanghai, where they make the local rice wine. On our way back, we pass the local villages at Ban Chan continue to see the royal temple at Wat Longkhoun and Ban Phanom, a village well known for its hand weaving. Overnight in Luang Prabang

DAY 03 : LUANG PRABANG – ELEPHANT VILLAGE – KUANG SI (B/-/-)
ABF, your car and guide will take you to Elephant Village. On arrival at the camp, you can stroll around to make friends with some very big elephants before enjoying the elephant riding in about 30 minute to the nearby jungle.
We then transfer to Kuang Si Waterfalls where you can cool off with a refreshing swim in the pools or walk along the forest trails. Along the way, we take a short visit to the tomb of the 19th century French explorer Henri Mouhot; the first European to rediscover Angkor Wat and to visit the Royal Kingdom of Luang Prabang. Before coming back to Luang Prabang, we stop to visit the Kuang Si Falls Butterfly Park, one of the must-visit spots, newly opened on January 2014. We will also stop to visit local villages of Lao ethnic minority groups at Ban Ouay, a Hmong village, Ban Ou a Laoloum village and Ban Thapene, Khmu villages. Arriving in Luang Prabang, we transfer to Wat Siphouthabath to admire the sunset. Overnight in Luang Prabang 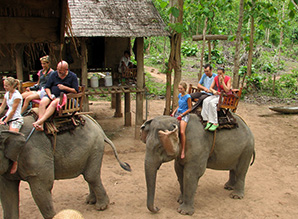 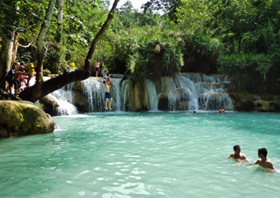 DAY 04 : LUANG PRABANG – VIENTIANE – CITY TOUR (B/-/-)
You will take the morning flight from Luang Prabang to Vientiane QV112 LPQ VTE 07:45 08:35
Upon arrival enjoy a guided tour to discover the hidden charms of Vientiane. Vientiane is one of the quietest capital cities in the world, far away from the bustle and hustle of other Asian capitals.
Your tour begins at the serene Wat Sisaket, the only temple left intact after the Siamese (Thai) invasion in 1828. It is one of the most beautiful temples in the capital, and its breezy teak covered hallways are filled with thousands of miniature Buddha statues.
Continue on to the nearby Wat Phra Keo. Used as a religious museum, Wat Phra Keo displays a collection of both Lao and Khmer works of art. Also nearby, is the Presidential Palace. Although you are not allowed to visit inside, it is a good glimpse in to the town’s colonial past as this building formerly served as the French governor’s palace.
Visit COPE, an association working to help landmine victims. A visit to the center provides in-depth information about the history of the American/Vietnam war and the lasting impact of unexploded ordinances (UXO) in the area and the efforts underway to clear them.
In the afternoon, continue to the Patuxay monument, Laos’ version of the Arc de Triomphe, where you can climb the stairs to the roof for sweeping panoramic views of the city.
Next, your tour takes you to That Luang, the holiest site in Laos. Constructed by King Setthethirat in the 16th century, the temple is resplendent as the sun is shines upon its towering golden spire.
End your tour of the capital along the banks of the Mekong River as the sun begins to set. Stroll along the river, stop to enjoy a cold drink, or sample a snack from one of the many local food stalls. Overnight in Vientiane.

DAY 05 : VIENTIANE – BUDDHA PARK – DEPARTURE (B/-/-)
In the morning, we will first visit Wat Si Muang, which is very famous for its supernatural power. After that drive to Buddha Park which takes around 45 minutes away. On the way, stop and take photos of the Friendship Bridge which was built by the Australian government in 1994 and links Laos and Thailand.
Arrive at Buddha Park and enjoy a stroll around the park. Also known as Xieng Khuan, this unusual park is filled with over 200 Buddhist and Hindu statues. The quiet and tranquil setting along the Mekong River is a contrast to the slightly eccentric sculptures which were built in 1958 by a Laos’s shaman. The concrete sculptures are bizarre but intriguing, sitting majestically in the peaceful park.
After visiting Buddha Park, start the drive back to Vientiane. En route, stop at Mai Savanh to explore the traditional textiles of the Lao people. This shop specializes in high quality silk products and involves several families in their process, from the northern province of Luang Nam Tha Province and the southern provinces of Attapeu and Sekong. (Note: Mai Savanh is closed on Saturday & Sunday)
We will then transfer out to the airport to take the departure flight 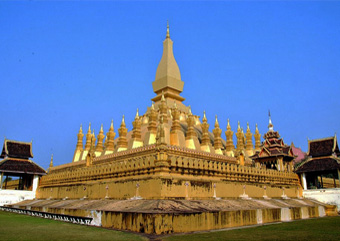 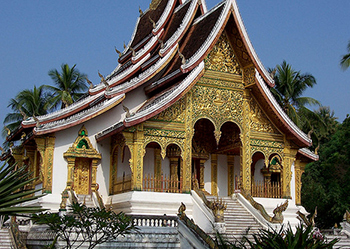